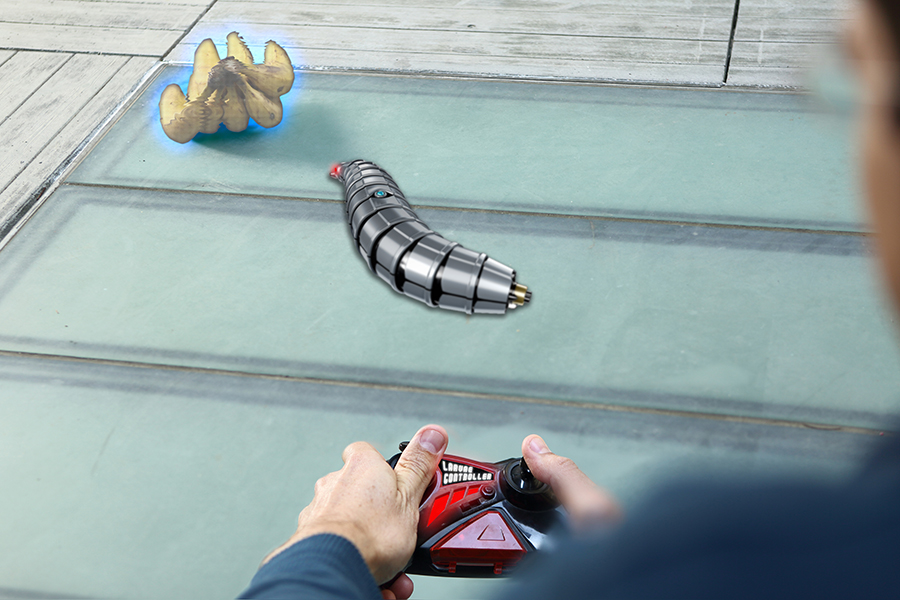 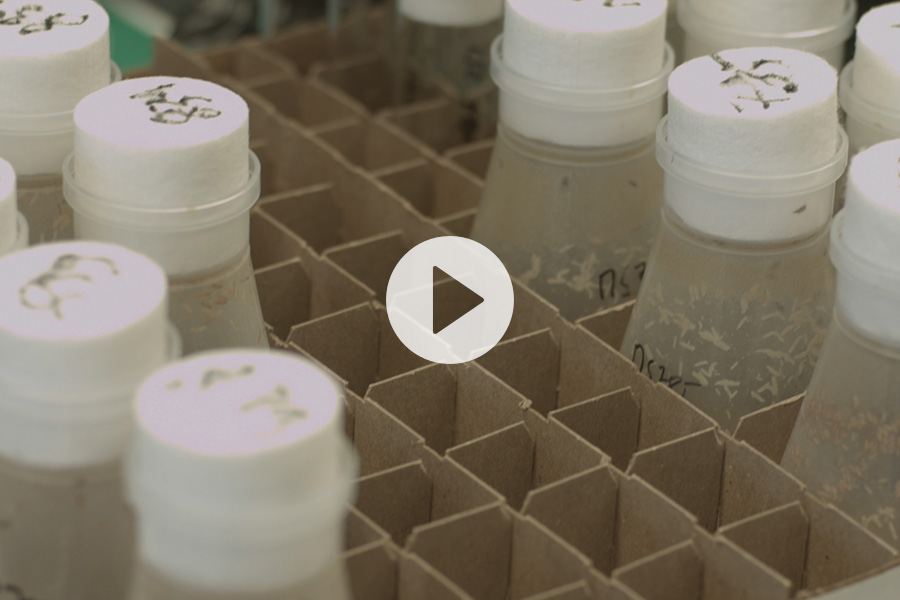 Fruit fly larvae need to sniff out and consume enough food to increase their body weight by a factor of 1,000 in just six days. But how do they do it?

“Recently there was a fire in my apartment block,” says Matthieu Louis, leader of the Sensory Systems and Behaviour group at the CRG. “I could smell burning plastic, and thought it must be coming from my kitchen. But when I went in there the smell didn’t increase. Then I went in the hallway and I could tell it was stronger, so I knew it was coming from another apartment.”

Luckily for Louis and his neighbours, it wasn’t serious and the fire brigade soon dealt with the problem. But his story neatly demonstrates the exact phenomenon his lab is working on: chemotaxis. Or, to put it simply, how organisms move in response to smells.

Smell – or at least the ability to sense chemicals in the environment – is perhaps the oldest sense and it’s fundamental to the survival of all living things, from bacteria finding their way towards food to animals (and scientists!) sniffing their way out of danger by figuring out the location of dangers such as predators or fire.

The larva that turned

Rather than having millions of nerve cells in their noses like dogs or humans, for example, fruit fly larvae have just 21. This makes them a useful model for studying how sensory inputs from the outside world are translated into nerve impulses that control behaviour.

As Louis explains, “When you consider how they are put together, the neuronal architecture of the olfactory system is roughly the same as that which is observed in vertebrates. That’s quite exciting because we have a massive reduction in the number of neurons, but you don’t sacrifice the organisational principles which are there in more complex systems like humans.”

This means that the larvae still respond to smells in their environment using the same logic as larger animals. They will head straight towards the source of a tasty smell when it’s getting stronger – similar to a dog on the trail of a rabbit or a person in the street sniffing their way to a delicious bakery – or stop and turn from side to side when they lose the scent, in the hope of capturing it again.

“There’s a loop you create between sensation – perception of the sensory stimulus – and action,” Louis says. “So we’re trying to predict something about the action from an understanding of the perception – how much information can the animal extract from the smells in its environment to find out where the food is located.”

By carefully monitoring individual larvae in a tightly controlled environment, Louis and his team were able to see exactly how the animals responded to changes in the concentration of a delicious pineapple odour – moving quickly forward when the smell was getting stronger, and stopping and turning when it became weaker.

To simplify things even further, the scientists used larvae that had been manipulated in such a way as to have just one functional nerve cell in their nose rather than the full set of 21. Yet even with this single cell, the larvae still showed perfect responses to the pineapple smell.

The next step was to place a tiny electrode next to that nerve cell – an extremely delicate job – to measure how quickly it was firing in response to the changing odour. To Louis’ surprise, he and his team discovered that there wasn’t a straightforward relationship between the activity of the nerve cell and the level of the pineapple scent in the larva’s environment. Instead, this single nerve cell was somehow processing how the smell was changing – something known as an odour gradient.

The researchers found that the nerve cell was firing faster when the gradient was increasing (getting stronger) and slowing down as the gradient grew weaker. In turn, fast firing meant the larva would keep running forwards, while slower signals or no nerve impulses at all were the sign to stop and change direction.

As Louis explains, “We were not expecting so much information processing already at the level of a single olfactory nerve cell. It can exactly detect how much the smell is changing during motion, and use this information to deduce whether it is moving toward or away from the source.”

To answer this problem, the team used an exciting new technique known as optogenetics, where the activity of the nerve cell could be precisely controlled in response to flashes of light. By using the light pulses to make the nerve cell fire fast, slow, or at intermediate levels, the researchers created a ‘virtual’ odour gradient.

“This is a trick we can use,” says Louis. “Through optogenetics we can create artificial sensory realities. So we could then ask if you challenge a larva with this virtual odour gradient, like it’s detecting a real odour gradient, what will it do?”

Impressively, the larvae responded in exactly the same ways to these ‘virtual’ smell gradients as they did to the real thing. When Louis and his team made the nerve cell fire rapidly, the larva moved as if it were chasing straight after the smell of food. But when they slowed down the light pulses, making the nerve cell fire slowly, it stopped and turned. Effectively, they had developed a way to ‘remote control’ the behaviour of a larva by manipulating the firing of a single nerve cell.

Thanks to painstaking measurements the team was able to develop a mathematical model to describe exactly how the rate of nerve cell activation is related to behaviour, and this exactly matched up to their findings with the real larvae in the lab. Intriguingly, they also showed that there’s still an element of randomness to the animals’ behaviour: it’s not a 100 per cent certainty that they will run forward in response to a particular level of nerve firing.

“The larva is not just a robot,” explains Louis. “There is some variability, and some opportunity for it to implement its decision. But to a very large extent we were able to predict its behaviour based on the knowledge of the activity of this single olfactory nerve cell in the nose. This is the one of the first attempts to predict behaviour based on controlled olfactory input – we’ve been able to mathematically describe what’s coming in to the olfactory nerve cells and going on to the motor nerve cells that are then implementing the actual behaviour, making it move.”

Although Louis and his team have focused on a single nerve cell, he likens his achievement to figuring out the first component in an incredibly complex electrical circuit. And this should also scale up to more complicated organisms.

“The number of nerve cells we’re talking about here in the larva is around 100. But many of these processes, like detecting a change in concentration, are things that are achieved by most organisms including humans. So the chances are that the mechanisms that we’re discovering here are basic principles that we think will be implemented in other organisms. That’s why we’re so keen on mathematical modelling – there’s a logic that is common to the building of most brains.”

As well as being an important scientific step forward, which the team published in the journal eLife, this project has also been a major technical challenge. It took six years and several national and international collaborations to develop the precision techniques required to measure the impulses coming from a single nerve cell in a larval brain and the optogenetic tools. But in Louis’ view, this was worth it.

“My vision was to develop a model – a model that would teach us something about what’s happening in the brain of the larva when it’s navigating an odour gradient. This was an ambitious task, but my lab was brave enough not to shy away from those technical challenges. It took a lot of effort and being bold, and we eventually succeeded. I would say that bringing all the pieces together was incredibly satisfying – to be able to make that scientific journey – and I feel that we managed to get to the destination.”